Bharti Dayal – Madhubani Artist from INDIA. Her art represents the amalgamation of the deep-rooted traditional art practice with the contemporary themes. Bharti Dayal’s ardent desire is to spread cosmic harmony amongst humankind through her work.

Bharti Dayal was born in December, 1961, from Samastipur in northern Bihar, INDIA. The region that bears high eminence in ancient Indian history, and preserves the rich heritage of folk paintings known as Mithila, or Madhubani paintings. Bharti inherited this art from her family.
Madhubani art traditionally use the painting materials made from vegetables, minerals and alike substances found in nature. Bharti has a post-graduate degree in botany, which helped her more in identifying natural sources of colors from plants that she uses in her artworks.

In respect with the designs and forms while remaining true to the traditional roots, Bharti Dayal induced an intellectual edge into her paintings, thus lending them a more contemporary look. Today she has several associate Madhubani artists in Bihar with whom she works in unison to create unique works of art. No time frame can be given for the completion of a painting. It can either be a whole day under the effect of inspiration, while others can linger on for months.

Because of the space concern not all of the achievements are mentioned here. You can check out her biography in detail at Bharti Dayal website.

Bharti Dayal on Novica.com from Aman Dayal on Vimeo.

DSA has chosen Madhubani OR Mithila Painting style as the inaugural article in this series of articles on the ‘Indian Folk Painting Styles’.

Madhubani OR Mithila art form acquired its name from the kingdom of Mithila where it originated around the seventh century A.D. At that time, the region was a vast plane located primarily in what is now eastern India as well as in southern Nepal. However, the cultural center and capital of the region was in what is now the city of Janakpur, Nepal only 20 kilometers from the Indian border. Janakpur is of course the home of Janakpur painting while the town of Madubani, India is home of paintings of the same name. Mithila art consists of both kinds of paintings of which Madubani are more common.

The tradition of wall paintings as well as surface paintings for beautification of dwellings and ritual purposes in Mithila is believed to have survived from the epic period. These decorations are mythological murals, added with deities of Hindu pantheon, besides regional flora and fauna. The women artists, according to the old age tradition, are the sole custodians who practice this folk painting passing down for generations from mother to her daughter.

In Mithila, painting is normally done by women folk in three forms:

Although Mithila art did not directly lead ancient India to a conventional sense of literacy nor to formal education of the masses, it did give a voice to the voiceless. As a communication technology, it provided something for those artists that was and remains a critical element of their society: a heightened consciousness.

Long before there were computers in most of our homes, there was Mithila Art in homes of what is now India and Nepal. Originally, this folk art form mainly consisted of lively murals painted on the walls of homes in rural villages. But it was much more than simple art for art’s sake. This was art that gave a voice to powerless rural women as a communication technology. 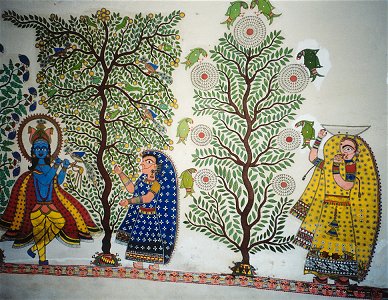 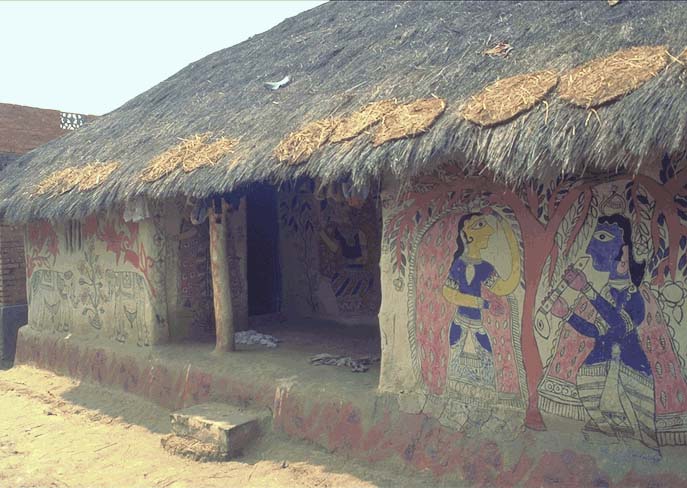 Herewith this article we are trying to give exclusive Indian folk art painting styles a spotlight. Hope you will find it helpful. Let us know how you like it and we are open for Q&A… So enjoy all …

Hope you all must be having lots of fun with art & craft projects. The spring is at the corner and a great time is coming to go out and explore new art and meet the artists and learn new things.

Art is the desire of a man to express himself, to record the reactions of his personality to the world he lives in.      – Amy Lowell

Dessein All since beginning has always been discussing and promoting Indian folk art. It started with Warli and Madhubani Painting styles. After a long break Dessein All is starting up a month to month series of articles on the Indian Folk Art Painting Styles. Indian art is a true representation of the Indian culture, Indian traditions and the Indian society. This is a tribute to the folk art and folk artists of India. The objective is to cover different types of Indian Painting styles, practiced throughout the Indian subcontinent, which use diverse processes. Through these series of articles we will be discussing each one style for the whole month. That will include different categories such as:

Like Loading...
July 30, 2011August 5, 2011 | desseinall
Fabric painting is a creative way to transform plain fabric with your own design. Even if your drawing skills are minimal, there are a wide variety of stamps, stencils and other tools that you can use. Natural fabrics hold fabric paints better than synthetics, but make sure your fabric paint is designed for your type of fabric. You can use an embroidery hoop or attach the fabric to a wooden frame to make it easier to paint on.
Other techniques
Spray painting
Block printing
These are the hand painting  and printing techniques those you can easily practice at home after taking necessary precautions.
Warning : An adult person should supervise, if children under age 10 are using any of these techniques which involve chemical paints/spray guns/sharp tools.

“Thank you everybody for support and encouragement”…. DSA.

First of all I would like to thank every one who encouraged and appreciated our art works so far.

DSA’s new line of T-shirts has been introduced yesterday September 17th and received a Great applause.

This has raised our bars and we promise to keep up with the good quality of innovative designs.